The NBA’s 75th season has already been filled with a lot of events and surprises, and as the hype around this year continues, NBA fans are being gifted with more merch than usual.

Legendary Philadelphia sports brand Mitchell & Ness is continuing to celebrate the NBA’s 75th season and will be releasing a massive collection of jerseys and shorts, along with premium headwear, apparel, and accessories.  In addition to their trademark authentic styles, Mitchell & Ness will be releasing a collection of commemorative uniforms in Silver, Platinum, Gold, and Rose Gold featuring the official NBA 75th Anniversary season logo, along with a look into the future with the brand’s Iridescent collection. 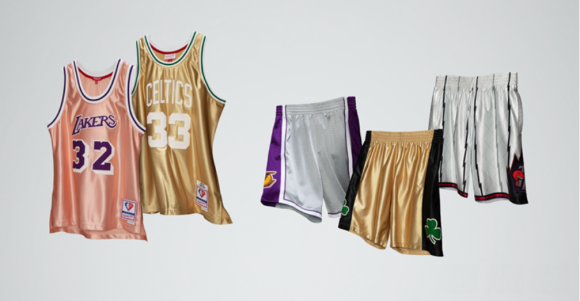 The brand will also unveil a new company initiative named ‘Consciously Classic,’ which will focus on sustainability by integrating renewable and eco-friendly materials, will also be collaborating with iconic leather smith Jeff Hamilton, longtime affiliate Don C of Just Don, official NBA game ball provider Wilson Basketball, as well as many other upcoming and established brands.

And that’s not all. Mitchell & Ness will be launching their hometown series, which will include team-specific apparel and headwear capsules curated with the nation’s most influential local boutiques. Some of those include Bodega (Boston & Los Angeles), UNKNWN (Miami), and Xhibition (Cleveland).

But wait, there’s more! The entire month of February the brand will be celebrating the 71st installment of NBA All-Star with product drops which will include retro All-Star product giveaways and interactive content on the Mitchell & Ness social channels. Then after the NBA 75th Anniversary team is announced, the company will be revealing its own lineup of the 75 Best Selling Jerseys of All-Time, alongside a new ‘Journal’ section on the website that will feature original stories, content, and more.

75th Anniversary jerseys, jackets, shorts, headwear, hoodies, tees, and more will begin releasing online on December 23rd, with prices ranging from $32-$400. So be sure to visit Mitchell and Ness for more information on their official website.

Spalding and UNKNWN Link Up For A First-Time Collaboration
Can the Dallas Mavericks Save Their Season?
Kevin Porter Jr. and Jadakiss Swim With Ducks In New Winter Collection
Jimmy Butler Is Partnering With Rhone to Elevate Your Lifestyle and Performance