If you’ve been a cannabis consumer for a decade, then odds are you remember the nascent days of “wax pens” and the headache that came with figuring out how to use the devices inspired by e-cig culture of the 2010s. While the convenience provided by these early gadgets was eye-opening for a lot of smokers, the learning curve coupled with the poor quality of many of the initial inventions made the experience less than ideal. But in the years since, largely due to the innovations by Puffco, concentrate consumption has been getting more convenient by the day. We spoke to the founder of Puffco, Roger Volodarsky to hear about how he first started the brand and its trajectory to date.

The Genesis of Puffco

Roger begins his story by talking about the early 2010s when, “what we were calling ‘wax’ at the time, hit the scene.” In that era, one of the only real ways to consume the wax (that we now call ‘concentrate’ or something more accurate) was through the archaic dab pens cropping up. “When that hit the scene in New York, I felt completely liberated, being able to run around the city and enjoy myself with no fear whatsoever of getting arrested,” Roger explains. But this was still an exceptionally new tech, and most of the products were prone to breaking.

So a friend of Roger’s, who noticed his keen affection for the new smoking format, suggested, “Why don’t you try to do this yourself?” That was the birth of Puffco.

“I wasn’t doing it to make a ton of money, I really just wanted a better product than what existed in the market,” says Volodarsky. The brand launched in 2013, and one of their big innovations in the first few years was creating a vape system that didn’t rely on coils (or, god forbid, plastic wicks) and instead utilized a ceramic bowl. The Puffco accessories went through a few iterations, until the Puffco Plus launched in 2016—the culmination of all of the revolutionary tech Puffco was implementing into its smoking devices.

“It was built on the idea that this is a vape pen with no plastics in the air path, no glues and no fiberglass wicks,” Roger explains of the innovation. The Puffco Plus has had minimal upgrades since the 2016 iteration, as they got it right the first time. 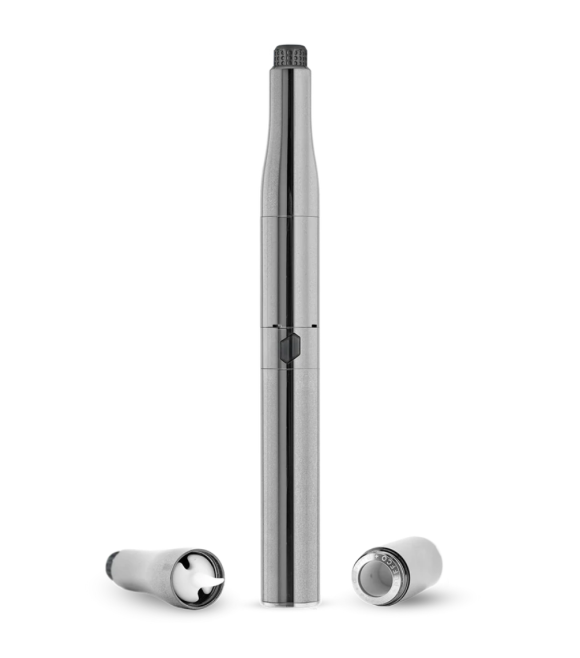 “We still make the Puffco Plus; it’s selling better today than it did in 2016,” Roger tells me. Consumers have changed a bit since 2016, but they still keep coming back for Puffco’s beloved tools. Roger breaks down the difference in today’s vape market to me as comprised of two main factors: a higher expectation on the delivery of a fantastic experience and more educated users. Even with these changes in mind, the Puffco Plus still checks the boxes.

Puffco is always evolving and integrating new products into its line, but the next major device launch was the Puffco Peak in 2018. Interestingly, Roger tells me, “when we were developing the Peak, there was a big conversation of, ‘should we be making this’ Concentrate sales were slowing at the time.” They pushed through and created the rig, which is to this day one of the most efficient methods for consuming concentrate available on the market. “Today in 2022, concentrates are the fastest growing segment in the space,” Roger remarks. Both the Puffco Plus and Peak have streamlined the process of consuming concentrate, alleviating the learning curve required by the early wax-based products.

I was curious to hear about the OneTreePlanted initiative listed on their website. “We want to leave behind a better earth than the one we were born into,” Roger tells me after I ask about the program. To my surprise, this is actually just one of many initiatives the brand takes to give back. Roger explains how they have a lot of charitable efforts as a company (from raising money for Lupus to philanthropic efforts to give back to marginalized communities), but don’t always spotlight them from a marketing perspective; rather, they’re doing these things because it’s the right thing to do.

We really see this company as a vehicle for the change we want to see in the world.

The Future for Puffco

“Puffco is always working on something new,” Roger eagerly tells me. “Currently, we have fouteen different projects in development, from apps to accessories to larger initiatives and projects,” he elaborates. The brand is “in a constant state of development,” as Roger puts it. “We have more ideas than we have time to execute,” he says—a good problem to have. With recent releases like the Cupsy and other improvements to their products always in the works, Puffco—as was the case in its nascent days—is always committed to evolving and creating the best possible product for their community.

I often ask founders what their favorite thing about their brand is, and it can be tough to nail down the exact answer. But for Roger, the answers flows like water. “That’s easy. My favorite thing is the person Puffco—and my community of employees—has made me,” he recalls warmly. Almost a decade since the brand’s inception, Roger is exceptionally grateful for how the evolution of the brand has contributed to a personal evolution. And in every utterance of gratitude, he references his team and the role they’ve played in his development.

Puffco will be present at this weekend’s Green Street Festival, and is—as Roger put it—”in a constant state of development.” In many ways, Puffco and Roger are the blueprint for how a brand can rise to success while maintaining a focus on what it was built on: innovation and the community.