TikTok has been instrumental in changing the fashion landscape over the past few years, opening up another avenue for designers to distribute their work to a new audience. And in the years since the platform’s launch, many burgeoning designers have managed to cement their initial audience by combining content creation with their practice of honing their craft. Ryan Kwong and his brand Rotten Closet are a great example of the modern fashion auteur—one who toes the line between persona and designer.

The Genesis of Rotten Closet

Kwong has been using the Rotten Closet moniker for some time now, but “it’s had a lot of different faces,” he explains to me. What initially began as a vessel for selling vintage clothing has since blossomed into a hybrid brand—one part selling vintage and designer, and another part a foundation for Kwong’s own designs. Around four years ago, Ryan was let go by the consignment chain he was working for at the time. “I took that as a sign to go full fledged and just sell on my own,” he tells me, referring to the era when he began really focusing on the reselling aspect of Rotten Closet.

What began as primarily a reselling effort pivoted towards proprietary creation around the beginning of the pandemic. Ryan has been designing his whole life, but around 2020 is when he started truly devoting himself to his own design work.

Now is the time when I really started to execute what I wanted to do without any distractions, without any step backs. Without quitting.

Throughout the pandemic, he began producing some of the pieces that have become beloved by the online fashion community in the past year and change, including his Corset Derby and other reimaginings of classic silhouettes. At the present moment, Ryan still utilizes Rotten Closet as an avenue for reselling vintage and designer clothing, in addition to housing his own designs. “Now it’s just a culmination of where I can put all my creativity into, whether it be selling or curating certain types of pieces, and then also selling designs that I make myself,” he summarizes to me.

Ryan’s inspiration for the Rotten Closet brand comes from two primary worlds: those in the fashion content world and then the traditional design world. He grew up steeped in the Youtube fashion community, and gives a nod to creators like Jacob Keller, Sangiev, Magnus, Avery Ginsberg, Ray Miah and more in developing his content. “Seeing people that were ordinary like me, starting off their brand and personalities first, and then creating clothing labels based off those personalities really inspired me,” he tells me.

We spend a bit of time discussing Emily Adams Bode and the impact her brand has had on contemporary menswear in the past few years. “I think it’s because she’s so unique. She does vintage, repurposing vintage like no one else has done it on such a high scale. And she does it so tastefully,” he explains. In many ways, Rotten Closet and Bode operate under a similar ethos, revitalizing vintage/classic concepts with a new spin.

In the early design days, “I only had one item in my catalog, a collegiate knit based off vintage college sweaters, and I wasn’t really happy with it,” Ryan tells me. Because of the simplicity of the first piece, “I knew the next piece had to be kind of crazy,” he grins to me. “I didn’t want it to be a tee shirt with a screen print on it,” he chuckles. He drafted up a cockroach Jordan 1 during that time, but found himself hating the mock up. So he asked the questions: Man, what do I like? What do I like to wear?

“I’ve always liked wearing derbies. I’ve always liked wearing boots, ever since high school,” he tells me, adding: “How many people have dress shoes that they can actually wear and think are cool?” The only real options were Doc Martens, or a much more elevated (and expensive) designer derby like those made by Ann Demeulemeester. “There was no real in between, so that’s where I wanted to design, in between,” he explains. 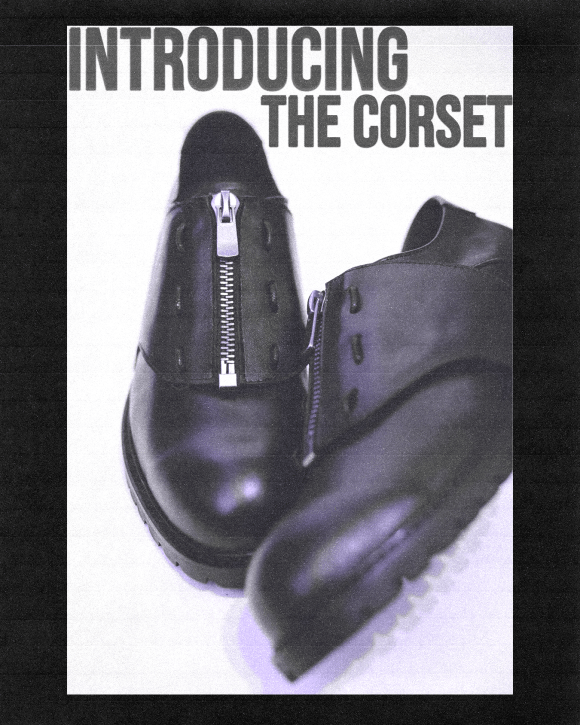 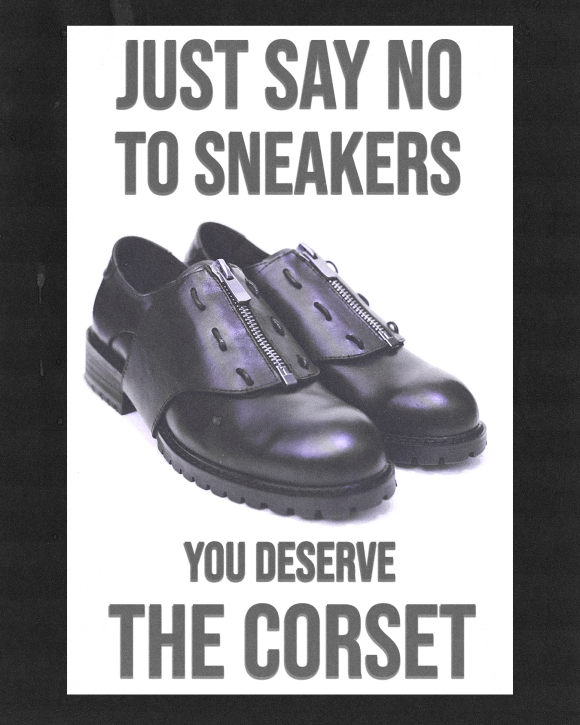 “I wanted to offer a silhouette that took after the classic and elegant derby shoe, but something you could transform to be a little bit more gritty. I think that perfectly encapsulates my personal style,” Ryan explains the process of coming up with the Corset Derby. The first Derbies dropped in mid-2021; he did another launch of 500 pairs this year, and plans to do another run some time soon.

As for the future of Rotten Closet, Ryan has ambitions in both the worlds of reselling and his personal design. A lot of what he’s selling on the site right now is from his personal collection, but he’s a self-proclaimed hoarder and desperately needs to unload some of his wardrobe.

From a design perspective, Ryan has two exciting footwear projects in the works. One is a boot that takes inspiration from the iconic YSL Wyatt. The second is a hybrid shoe he refers to as the “morph mule.” It operates as both a loafer and a mule, hence the name. Those are expected to drop this summer, with the boots’ release TBD. He’ll also be re-releasing the corset bag, a companion piece to the corset derbies that utilizes a similar aesthetic.

When I ask for some advice for fledgling fashion designers, Ryan’s response is optimistic and exciting, based on his own experience: “This is like my fifth brand. If I never kept going, then I wouldn’t have known what laid in the future for me.”

He goes on: “You don’t need professional training nowadays, in my opinion. There’s so many elements you have to consider, but don’t let it overwhelm you. Just get started.”