“Be the change you want to see in the world.” It’s an overused quote that every one of us has surely heard countless times, but one that not many truly take to heart. Unless you’re Kaito Hashimoto, that is. At just 22 years old, the young model-turned-designer has done everything from appearing in Calvin Klein and Givenchy campaigns to working under the tutelage of fashion’s most respected designers and cultivating his own brand, Four Atelier. We recently had the chance to catch up with the LA-based designer and chatted about everything from his love of skateboarding to his relationship with Tyler, the Creator.

Skating and Entrance into the World of Fashion

Hashimoto’s story begins hopping around the globe in his early youth, from Jamaica to Japan, Texas, and finally, California. “Growing up, both of my parents weren’t too cultured in the arts per se” he tells us, “so I never grew up watching movies, looking at paintings, or even listening to music really”. Instead, Hashimoto’s influences derived from the internet, which I’m sure many of us Gen Z kids can relate to. Coming of age in the mid to late 2010’s meant one thing for many of us: Supreme. Kaito, who started skateboarding in high school, looked to Supreme’s star studded roster of skaters for early influence, soaking up game from the likes of icons like Na-kel Smith.

Skating was my introduction to this whole world, street culture, and art in a way. Through that, I started getting into fashion and style.

Skating and fashion go hand in hand at this point, so it’s nothing new that Kaito’s formative years were shaped by the sport. What makes him so interesting, however, is the series of seemingly serendipitous moments that have brought him to where he is today. In his skating days, Hashimoto would chat back and forth with Na-kel Smith via DM, leaving comments about the skater’s latest shoes with adidas or a recent skate clip. Eventually, once Kaito was in Los Angeles, the two forged a friendship which ultimately led to Smith appearing in the first marketing campaign for Four Atelier. As I come to know Kaito, it becomes clear that experiences like these are emblematic of his career as a whole. “Just getting him to model something that I made years and years down the road was a huge dream come true, but when it happened it felt natural”, he says, reflecting on the moment.

Similarly, Kaito’s relationship with Tyler, the Creator arose purely by chance. Just after moving to Los Angeles from his native Bay Area to attend USC, Hashimoto found himself in the presence of the rapper while visiting the Golf Wang store for a reopening. “It was so cool, he had this aura about him. I wasn’t a superfan so I wasn’t that nervous, but the aura was there,” he tells us, excitedly. “I was there with a couple of my friends and Tyler liked how we looked.” Just like that, Tyler picked Kaito right off the street and had him modeling for Golf Wang, which sounds exactly like something only Tyler, the Creator would do.

Modeling for Golf led to working at the Golf store and spending increasing amounts of time around Tyler, which Kaito cites as one of the main reasons he got into fashion. After working at the Golf store, Hashimoto jumped at the opportunity to intern at the design office, where he learned how to make tech packs and kickstart his own fashion career. From Golf, Kaito moved to an internship at YEEZY, which he secured through an acquaintance at a Louis Vuitton shoot.

There, Kaito was exposed to an entirely new design ideology. After working at the Golf Wang store and interning for the design team, Kaito’s entire world revolved around the vibrant aesthetic of the brand for a period, and Kanye West’s brand lended a contrasting viewpoint. For every bright pop of color sampled at Golf Wang, YEEZY had a muted, muddy, and moody counter. After his internship at YEEZY Kaito found himself at ERL, one of the fashion world’s hottest brands at the moment. Naturally, Kaito was ready to launch his own brand after cutting his teeth with the industry’s cognoscenti.

The Genesis of Four Atelier

Everything I’ve described up until this point would keep most people’s plates full, but Kaito was finishing up a bachelor’s degree in business at USC the entire time. Unfortunately, the school offered very little in the realm of fashion, forcing Hashimoto to take matters into his own hands. His time modeling meant that countless garments had passed through his fingertips, and the young designer had ideas of his own. “I was seeing all of these cool brands and cool clothes that I felt like–I have ideas too and I want to put those into the world.” Much of Four’s initial purpose was to revisit garments that sparked Kaito’s interest, but improve upon them with his personal tastes in mind. Knowing this, it becomes abundantly clear that Kaito has an innate ability to synthesize his influences into pieces that feel distinctly of himself. 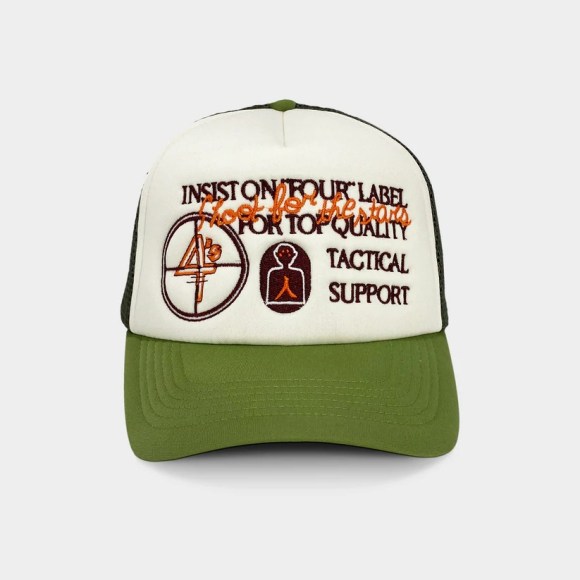 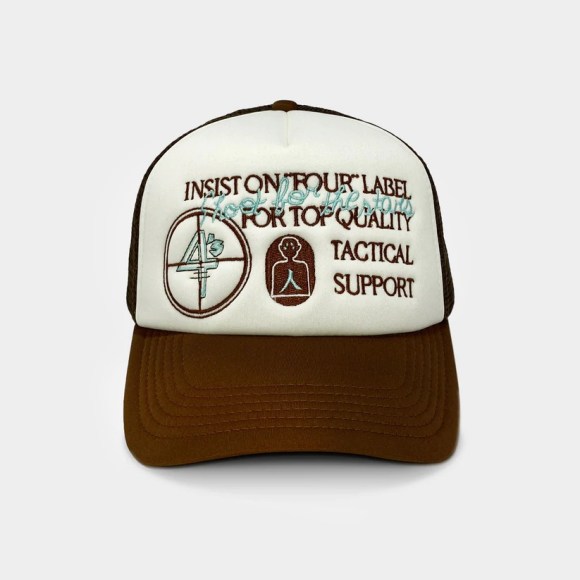 For example, Kaito’s second trucker hat release consisted of three different colorways, which saw him pairing the drab, grungy tones he familiarized himself with at YEEZY with the vivid palettes from Golf Wang and ERL. Each hat expertly juxtaposes green, burgundy, and brown with pops of orange, purple, and sky blue, creating unexpected combinations that simply work. It’s truly a testament to the designer’s eye and attention to detail. “I think I strive to make most of the things I make timeless, but the timeless pieces are decided by society rather than when you’re making it.” Kaito’s humility is apparent—he’s not yet confident to release designs under his own name, meanwhile his releases are fetching at least three times their retail price on second hand markets.

I think I strive to make most of the things I make timeless, but the timeless pieces are decided by society rather than when you’re making it.

The name Four Atelier arose from Kaito doing what he does best, which is what feels right. He describes not knowing what to call the brand, and feeling as though every name was corny. Eventually, Kaito came to the conclusion that it’s not the name that matters, but what is done with it.

“At the time the only thing I could think of getting tattooed was the number four, and I figured if I was so attached to that number it could work for the brand,” he explains, going on to say that “Growing up in Asia, four is kind of a faux pas. Some of the elevators there would just skip the number 4, and that always interested me. The number has this edgy, taboo energy and I thought that was cool. I think the symmetry of the number is beautiful, too; I instantly had so many ideas for what  I could do with it on a runway.” He’s right, too. Four Atelier’s name lends itself well as a medium for graphics, whether it’s plastered boldly on the back of a crewneck sweater or lined up in the crosshairs of a trucker hat.

Kaito’s eyes light up as I ask him about what he has in store for the future, and what stands out is the infectious energy between him and his friends. “A lot of the inspiration I get is from my peers. Every time I hang out with them they always have the craziest ideas and new clothes, and it makes me want to get new things, make new things. I think that back and forth with each other is crucial. In that sense it’s a team effort, but what’s cool is that we all have our own styles.” Kaito’s closest friends include Trevor Gorji and Owen Hyatt, who are both cult heroes in the burgeoning independent fashion scene, so his comments make total sense. Each individual’s output (Fugazi and Somar, respectively) hardly resembles another’s outside of the obvious creativity and passion involved. It comes as no surprise that Kaito is keen on collaborating in the future. With friends like that, it’s almost harder not to. 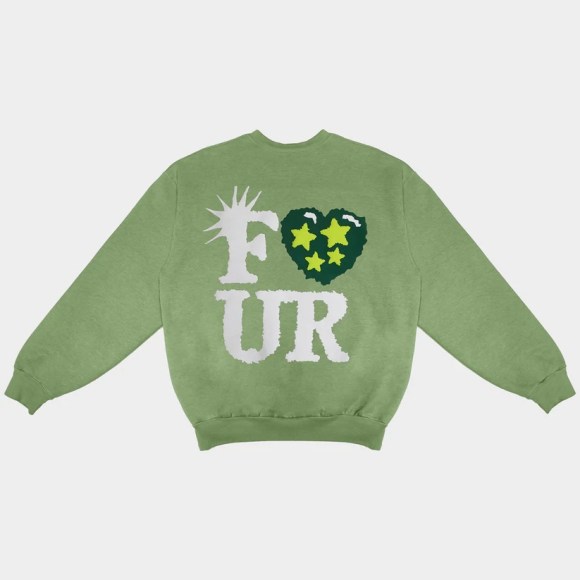 Before he starts collaborating, though, Hashimoto has a few other things on his mind. He’s working on some shorts and sweat suits to follow up his latest crewneck release, and teases us with a sample of an incredibly detailed briefcase-style bag he has in the pipeline. He tells us sampling has been a nightmare, as factories bail and money goes down the drain. It’s incredibly hard to start an independent fashion label, and his commitment to quality is as admirable as it is limiting. Production requires minimums, and minimums require sales. Kaito doesn’t seem fazed, though. “The people we’re making clothes for will appreciate and understand the quality when they get it.” Yes Kaito, we will.