On this week’s episode of our podcast Monday to Monday, host Mike Boyd chats with manager King Carter. Carter was originally an artist turned manager and represents superstar DaBaby as well as some other huge talent (Toosii and Blacc Zacc, to name a few). Carter’s position as an artist who has since become an immensely successful manager gives him unique insight into the game. In this episode, they discuss Carter’s transition into becoming a manager, his methods for getting his artists heard and some overall advice for emerging talent.

Carter began developing connections during his time as an artist in Charlotte, NC. “I started realizing like I had a knack of just like keeping relationships and being able to utilize them not just for me but for others,” he says. Carter wanted to start a label, and with his partner Arnold Taylor, they began SouthCoastMusicGroup. But to start, they really wanted good talent to launch. “It’s right in front of my face already. I got Baby right here,” Carter reminisces.

One of the things that makes Carter’s managerial process unique is his commitment to real-life interactions. In the early days of building DaBaby’s career, Carter was all about connecting with fans. “Our biggest thing was like we don’t want to use the internet, and that’s it. We want to go out, create real fans, get a real fan base,” he says. He is deeply committed to his craft and emphasizes how his work ethic led to his success. “Our whole thing was you do the work, God gonna do the magic. And that’s exactly what happened.” Throughout it all, his focus on people is exceedingly evident. “With music, it’s all about people. So it’s all about touching fans and creating and making yourself like a form of social currency,” he says.

Carter didn’t just stop with SouthCoastMusicGroup. He recently started another label that is more focused on developing up and coming talent. “It’s a label geared towards developing,” he says of his new project, Social Currency Enterprises. Between this label and DaBaby’s project, Blame it on Baby, Carter is keeping busy.

The manager’s advice in this episode is pretty unparalleled. When Mike asks him for his best advice for emerging artists and managers, he only drops dimes. “Take it serious. Because you only gonna get out of it what you put into it,” he quickly responds. “You might see something that nobody else around you sees. Don’t let that deter you. If it’s your vision, it’s your vision. Nobody else is gonna be able to see it until you make that vision a vision for the world,” he says, before finally adding some of the best advice of all: “Beliefs can be broken but knowledge can’t. So do what you know. Know how to do it and know that you know what you doing and know you gonna make it. And you will.”

If you loved this episode and want to hear Boyd chop it up with more managers and rappers, make sure to check out last week’s episode, when he chatted with Guapdad 4000. And also make sure to stream DaBaby’s new project, Blame it on Baby, available now on all major streaming platforms.

This week on our podcast Monday to Monday, host Mike Boyd sits down with manager extraordinaire Doris Muñoz. This interview is special, because Muñoz embodies so much of what is amazing about the role of a manager. She runs her own management company, mija mgmt, while heading up her nonprofit Solidarity for Sanctuary. In both of these roles, Muñoz demonstrates the power that artists/managers have to create change with their work. The nonprofit has a mission “to amplify the voices of immigrant communities through music, advocacy and the arts.”

Boyd and Muñoz discuss her work with her nonprofit, her mija mgmt company (which manages bedroom pop sensation, Cuco), tips on live shows/touring and some advice for landing a record deal. It’s a hell of an episode, highlighting one of the important factors at the core of the Monday to Monday brand. In the words of Dewey Finn, “One great rock show can change the world.” Muñoz’s work embodies this ethos, demonstrating that music (and those who create it) have the power to impact the world we live in. 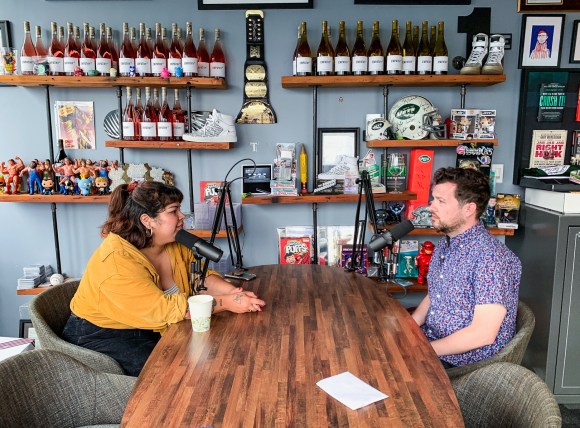 Boyd and Muñoz also talk about Muñoz’s genesis as a musician, playing multiple instruments throughout her childhood. Mike tells her what everyone else is thinking: “Wow. You play more instruments and have more knowledge about music than a lot of the artists I meet.” Music was in Muñoz’s family from the start, and she cites her family as the ultimate inspiration her commitment to the grind. “I always saw my mom hustling,” Muñoz tells Boyd. And years later, Muñoz has created a management company that is a safe space for artists to communicate and share ideas. “Shoutout to moms, for sure.”

Muñoz tells the story of meeting Cuco at a backyard show when he already had a devoted following. She approached him to have him play at her upcoming Solidarity for Sanctuary show, telling Boyd, “We literally met up for tacos the next day and just talked for like four hours and then just, decided to test run it. And we just kinda never looked back since then.”

The manager also shares some advice on the fast-paced nature of being a manager: “This job is 24/7 and a half. You know? It’s something that if you are not a thousand and one percent passionate about, yo, you’re gonna be miserable.” Muñoz and Boyd also discuss the trials and tribulations of touring, travel nightmares and the path to getting a record deal. The duo talk about all this and much more, so you’ll have to check out the episode to get the full scoop.

If you want to hear even more from managers and artists paving their way, make sure to check out last week’s episode, when Boyd sat down with Cousin Stizz and his manager Tim Larew.

Monday to Monday: The Rise of Cousin Stizz & Tim Larew
Westside Gunn Tells Us His Wrestling Master Plan, Favorite Weed Strains and Relationship with Jay-Z
Flipp Dinero Tells Us How Church, Poetry & Drake’s Co-Sign All Led to ‘Love for Guala’