On October 21st, the Golden State Warriors played the Los Angeles Clippers; the Warriors won 115-113 and Steph Curry scored 45 incandescent points and everybody (besides Clippers’ fans) had a lot of fun watching it. It was also the stupidest game of the NBA season—so far. While this was just one game that everybody has already forgotten about, it’s symptomatic of one of the NBA’s biggest systemic issues: there are too many jerseys.

In this game, the Golden State Warriors—a team so devoted to the color gold that they put it in their name—wore blue and red jerseys without a trace of gold, paying homage to their predecessors, the Philadelphia Warriors. Beyond simply wearing a different costume than their customary home whites, they unveiled a special court for the occasion, one that was awash in blue and red, but not any gold. The Clippers, a team that usually draws from a red and blue color palette, wore their home white jerseys, despite playing on the road.

A summary: the Golden State Warriors, for some reason, made themselves look as Clippers-y as possible in a game against the Clippers. If this all sounds very confusing, it’s because it is.

Gone are the days when teams established iconography and stuck with it—god forbid that teams would actually be easily recognizable. Instead, teams drape themselves in sundry exotic fabrics, no matter how discombobulating it may be.

The so-called City and Earned jerseys (which is corporate marketing-speak for “give us $120 for this mesh tanktop, you rube”) are the worst offenders. These are jerseys that seem deliberately designed to mess with my head, with a fresh batch of 30 new ones released each season. Why do the Knicks need a black get-up, despite never having prominently featured black in their entire 75 year history? Why are the Magic’s jerseys ablaze with orange piping? Why have the Sixers adopted a rainbow motif? Why did the Heat take inspiration from discontinued Trix yogurt? 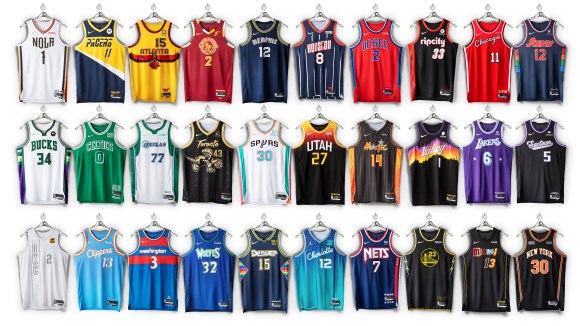 Nike
A sampling of jerseys, which I hate

This is not to say that the jerseys are ugly—in fact, a lot of them look good! Nor is this to say that teams’ uniforms should never evolve; periodic redesigns are necessary to keep the league’s visuals from getting stale. But the City and Earned jerseys are shameless gambits that serve no purpose beyond juicing fanbases for every spare dollar possible; no matter how attractive or well-received a new jersey may be, it’ll invariably be swapped out the next season for some equally befuddling jersey that has minimal relationship to the team’s normal color scheme.

These jerseys are a reminder of a darker truth that undergirds our relationship with our favorite teams: we’re simply customers to mega-corporations and our convenience isn’t ultimately important. But these jerseys aren’t a reminder of something even more important: which fucking teams are actually playing in the game.