As professional sports leagues turn younger and younger in recent years, the amount of pressure put on young athletes to evolve into consistent starters almost immediately has drastically increased. Eighteen-year-old kids are expected to play at the highest level from the day they enter the league. The problem with that expectation is that certain players arenâ€™t in the right place. We have seen time and time againâ€“whether it be Lonzo Ball coming into his own in Chicago or Andrew Wiggins becoming an all-star in Golden Stateâ€“ A change of scenery is sometimes all a player needs to reach the next level. None is more true however than the difference a fresh start made for Gary Trent Jr. Now playing out his first full season in Toronto, Trent has become one of the most reliable scorers the league has to offer.

Gary Trent Jr. was one of the highest touted prospects in the class of 2017, ranking eighth out of all players. Trent would play out his college career at Duke before entering the NBA draft in 2018. After being drafted by the Sacramento Kings 37th overall, Trent Jr was traded to the Portland Trail Blazers where he would begin his NBA career. Those first few years in Portland saw Trent Jr. take significant strides each season on the offensive end. In his second season, Trent Jr. put up a modest 8.9 points per game and was beginning to come into his own. Even with continued progression, it was clear that something was off with Trent Jr. The young guard wasnâ€™t playing with as much energy or excitement as in his days with Duke, and ultimately the Blazers traded Trent Jr. to the Raptors.

It was when Trent Jr. arrived in Toronto that things really began to change. It all began with a conversation with Raptors head coach Nick Nurse. He told Trent Jr. that they were excited for the impact he can bring on the offensive side, but needed him to buy in on the defensive end. Trent Jr. was a pretty poor on-ball defender when he entered the league and this was the area of his game that needed the most improvement. Trent Jr. immediately bought in and has propelled himself as one of the best young two-way players in the NBA now averaging just under two steals a game. This newfound confidence has turned Trent Jr. into a flame thrower when heâ€™s on, knocking down three after three. If he can have some more consistency in his shooting, the Raptors will have something special cooking in Toronto.

Itâ€™s impossible to understate the importance of being in the right place. Just a single full season on his new team and Trent Jr. is showing that he can be impactful and contribute to winning basketball. Trent Jr’s father and former NBA player Gary Trent chronicled the whole ordeal by describing how his sonâ€™s demeanor changed so significantly when he arrived in Toronto. As the league gets younger I think itâ€™s important to emphasize these stories like Gary Trent Jr’s, because sometimes a fresh start is all someone needs.

NBA G-League Highlights and Updates the Week of March 4th
Who Is The NBA Logo?
Flauâ€™jae Johnson Is Redefining What It Means To Be A Hooper And Musician

Not tall enough, not fast enough, and not good enough. These are among the many labels that pundits placed on Fred VanVleet after the 6’0 guard graduated from Wichita State in 2016. The consensus was that VanVleet played really well in college – two-time Mountain Valley Conference Player of the Year and the starting point guard on the Shockers 2014 undefeated regular season team – but he was never deemed good enough, by NBA executives, to spend a draft pick on. 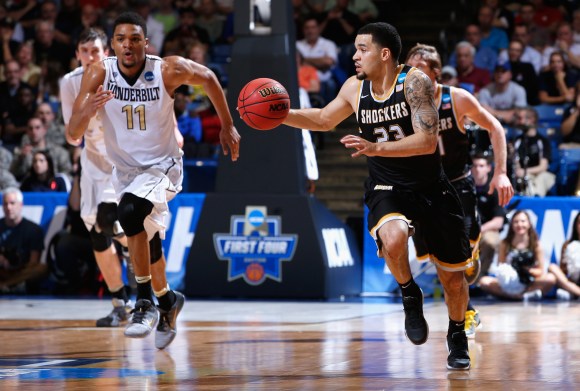 Getty Images
DAYTON, OH – MARCH 15: Fred VanVleet #23 of the Wichita State Shockers dribbles the ball in the first half against the Vanderbilt Commodores during the first round of the 2016 NCAA Men’s Basketball Tournament at UD Arena on March 15, 2016 in Dayton, Ohio. (Photo by Joe Robbins/Getty Images)

That sentiment changed after the undrafted scoring machine tormented the Milwaukee Bucks during the 2019 Eastern Conference playoffs. VanVleet, after only averaging eight points per game during the regular season, scored 21 points in a Game 6 clincher and then carried that momentum into the Finals, a series in which he averaged 14 points per game, to help his Raptors knock off the Golden State Warriors. 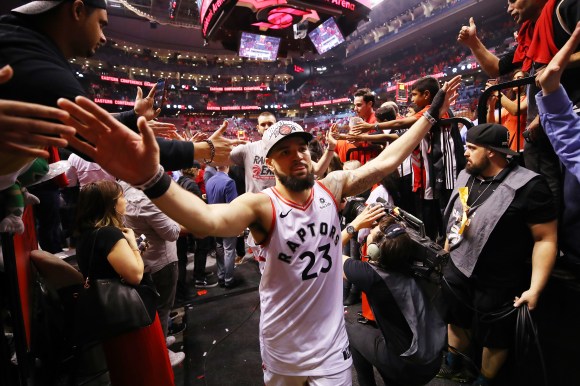 Getty Images
TORONTO, ONTARIO – MAY 25: Fred VanVleet #23 of the Toronto Raptors high fives fans as he walks off the court after defeating the Milwaukee Bucks 100-94 in game six of the NBA Eastern Conference Finals to advance to the 2019 NBA Finals at Scotiabank Arena on May 25, 2019 in Toronto, Canada.

Fast forward to present day, VanVleet has officially been handed the keys to the Toronto Raptors’ point guard duties after the team shipped Kyle Lowry off to the Miami Heat during the 2021 off-season.

After averaging 19 points per game last season, VanVleet has shouldered an even larger scoring load while Pascal Siakam battles a shoulder injury. So far, he’s proven himself to be more than up to the task, putting up 18.9 points per game while also averaging a career high in assists and rebounds, with 7.2 and 5.2 respectively.

Some of his notable performances this year include totaling a career-high 17 assists against Lonzo Ball’s Chicago Bulls, dropping 26 points, grabbing 10 rebounds and dishing six dimes in a victory over the Indiana Pacers, and schooling the Washington Wizards with a cool 33 points and six assist performance.

When you consider VanVleet’s willingness to play passionate defense as well, he’s starting to make a case for being a top ten point guard in the league; it’s a real possibility that he makes an All-Star team for the first time this February. This Raptors team, at 6-5, are going to win a lot of games – they’ve surrendered the fourth fewest points all year and lead the league in steals without one of their best players and most disruptive defenders in Siakam. In the likely case that the Raptors do get even better, expect VanVleet to garner uncharted recognition and accolade nominations for his stellar play and leadership.

In concordance with the motto that the 27 year-old has had for years, I can’t wait to see Fred VanVleet’s “Bet on Yourself” NBA edition gear tagged with all the awards that are surely coming his way.

A Too Early Look at The Top 10 NBA MVP Candidates And Their Card Prices
Yes, Drake Should Own A WNBA Team
The 45 Best NBA Signature Sneaker Releases

Thereâ€™s no better time of year for sports degenerates than October. MLB playoffs are in full swing, contenders are separating from the pretenders in the NFL, the NHL season is beginning and, most important, basketball is back. After a flurry of off-season moves, the NBA hierarchy has been restructured. Here are five teams that will exceed expectationsâ€”and five teams that will bust.

No team in the NBA had a more painful off-season than the 76ers. In a protracted saga that felt like watching a toddler argue with their parents, Ben Simmons completely ghosted the franchise before returning this week without telling anybody. With the status of their all-star guard in flux, the Sixers may struggle to start the year. This team is still good enough to make the playoffs, but itâ€™s unrealistic to expect them to reach the same level that made them the Eastâ€™s top seed last year. Unlessâ€”until?â€”a trade suitor comes for Ben Simmons, it will be a long season in Philadelphia.

Boasting a borderline MVP candidate in Luka Doncic, the expectations for the Mavericks get higher and higher every off-season. The problem with the Mavericksâ€™ off-season moves is that they stayed too complacent. Doncic and Kristaps Porzingis’s relationship seems to be degenerating by the day. Worse, Dallas hired Jason Kidd as head coach. Granted, Kidd played a major role in Giannis Antetokounmpoâ€™s development, but his coaching style has been described as â€œpsychological warfareâ€ and his ultra-aggressive defensive scheme in Milwaukee has fallen out of style. In a deep Western Conference, the Mavs could struggle to avoid the play-in tournament.

The Sunsâ€™ NBA Finals run last postseason was electricâ€”despite the fortunate fact that they didnâ€™t play one fully healthy Western Conference team. In the Finals, though, their fatal smallness was exposed by a huge and physical Milwaukee Bucks team. Although the Suns bulked up their frontcourt by adding Javale McGee, their 51.5 over/under win total is overly ambitious, now that the rest of West have had time to heal.

The Hornets made a splash last season by almost making the playoffs but ultimately lost in a play-in game. LaMelo Ball has taken the league by storm and the rest of the teamâ€™s young core will continue to improve alongside him; the problem is that the East has, as a whole, significantly improved, too. As such, the Hornets should occupy a position similar to last year and get into the play-in tournament.

The Pelicans have struggled mightily since the departure of Anthony Davis. Losing key rotational guards in Bledsoe and Ball, the Pelicans will be hard-pressed to run the fast break as effectively as they have in the past. New Orleans is doing everything it can to keep Zion with them, but it feels like theyâ€™re making all the wrong moves. If another disappointing season is in store, expect Zion to be on the move in a short time.

The Chicago Bulls have completely revamped their roster. Since taking over in 2020, Arturas Karnisovas has almost completely erased the mistakes of a Gar/Pax front office. This team is stacked with incredible wing defenders, great shooters and some of the highest flyers in the

league. At their best, this Bulls team could contend for home-court advantage in the playoffs. The future is bright in Chicago.

The Clippers will be without their superstar forward Kawhi Leonard and many people have counted them out as a result. Still, the Clippers were able to reach the Western Conference Finals without Kawhi, behind a rejiggered five-out offense that should also help them generate regular season wins. LA has great wings and continuity, which will enable them to maintain their contender-status.

At first glance, the Toronto Raptors would seem to be entering the first year of an extended rebuild. Despite trading franchise legend Kyle Lowry, the Raptors are in a good position to return to the playoffs after last yearâ€™s listless, mediocre campaign in Tampa. This team is poised to be a top 10 defense in the league, a common recipe for regular season success. Hopefully Pascal Siakam will bounce back from a disappointing season and the Raptors can make some noise this season.

The conversation in the East is centered around the Bucks and the Nets, and that’s about it. As a result, a promising Celtics team has been lost in the shuffle. Jayson Tatum has shown constant improvement, and Jaylen Brown is really coming into his own as a scorer. With a chip on its shoulder after last yearâ€™s disappointing season, Boston has an intriguing combination of talent and motivation. Moreover, with Al Horford back in the fold, the teamâ€™s chemistry should be A1 from day one.

Despite a slow start to the season, the Hawks surged late in the year to make the Eastern Conference Finals, showing they can handle the pressure in the biggest moments, even in enemy territory. Buoyed by last yearâ€™s run, theyâ€™re poised, once again, to win the Southeastern Division. If Trae Young can insert himself in the MVP conversation, Atlanta will finish even higher.