The Houston Astros will forever be a part of Major League Baseball purgatory after cheating during the 2017 season. 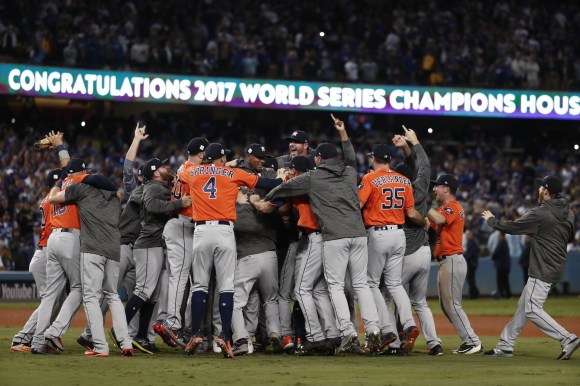 The Astros defeated the Los Angeles Dodgers in a seven game series that year, but were slated by the baseball world for the means in which they did so.

Here’s what you need to know about this saga – this ugly, ugly, saga.

Last year, MLB investigators revealed that at the beginning of the 2017 season, the Astros used their video replay review room, an electronic system that every team has, to decode signs that opposing catchers would show their pitchers during at-bats.

Using their center-field camera feed, they were able to identify the meaning behind each sign, for example, one finger down by the catcher would indicate that a fastball is coming a batter, or two fingers down means that a slider is.

This information would get relayed to the Astros dugout during an at-bat, and by way of Houston personnel banging on trash cans, Astros batters would know what pitchers were coming so they could capitalize.

Even though sign-stealing has been part of baseball for years, the use of electronic systems to do so isn’t allowed. There was even a rumor that Jose Altuve was wearing a buzzer on his chest during his walk-off home-run against the Yankees in the 2019 ALCS, but that was never confirmed to be 100% true.

Nonetheless, the trash-banging was proven to be true. That’s why the Astros fired manager A.J Hinch and general manager Jeff Luhnow, and why the MLB took away several of Houston’s draft picks, along with fining the team $5 million dollars.

The aftermath response around the league was one accord, fuck the Astros. The Cincinnati Reds wore creative t-shirts that read “Trash-town”, an on-the-nose play on words with the Astros nickname “H-Town” and their goofy trash-banging routine for getting leverage.

Fans got their boos in once allowed back into the stadiums, and their 2017 World Championship will have an asterisk next to it forever.

With this being said, as a die-hard Yankees fan, what I’m about to say will upset many people that I hold dear to my heart.

I want the Houston Astros to win the World Series in 2021.

Now, does the mere sight of Carlos Correa give me nausea? Yes. Could I count off my fingers the number of times that I’ve wished ill upon Jose Altuve? Yes. Have the Astros joined the Boston Red Sox in the exclusive club for teams Yankee fans hate the most? Hell yeah.

But guess what? The Yankees don’t matter right now. They’re watching the ALDS like I am, on the couch. I don’t have a second baseball team, and never will. So the Yankees absence from the postseason will always mean one of two things for me. I either will not watch the games, or I will watch as a baseball fan.

Now, whether it is my short attention span for watching Netflix, or my unwillingness to simply fall asleep at a reasonable time, I’ve found myself consistently tuning into the MLB postseason. By law, this puts me in baseball fan mode with the Yankees eliminated.

What are a few necessities for the neutral, unbiased sports fan in America? Drama and storylines. When you think of the choice words that the likes of a Carlos Correa might have for a salty baseball world that just saw his team win a World Series fair and square – that’s drama.

An outside view of the repercussions of outrage from Dodger fans for the next 5 months of the offseason, with the sentiment, “We scolded them for cheating and then practically let the same group of players beat us 4 years later …” Ouch, one helluva a story. 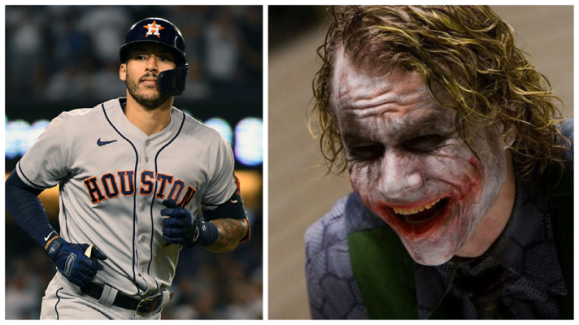 Here’s an analogy. The Dark Knight makes for such a great film in large part thanks to the aura and demeanor of the Joker. Even as the antagonist, the Joker is the most dynamic character in the movie, standing for evil and not being sorry about it.

Case in point, they cheated, became the villain, and did little to sell themselves as better than what the world made them out to be.

Get this though. After 2017, with the villain status pinned to their chest, the Astros won 100+ games in two of the next three seasons; reaching two American League Championship Series and one Fall Classic, but never winning the World Series itself. Nonetheless, they’ve proved that they can be a great team without cheating.

What would the Dark Knight be without the Joker? Just another movie? Maybe. What I know is that Major League Baseball’s postseason would be far less interesting if the Astros can’t overcome the 2-1 deficit they face in the ALCS against the Boston Red Sox.

So go ahead Houston – win the Fall Classic. Upset the established order, and turn everything into chaos.