The state of Wisconsin has produced some elite-level NBA talent in recent years. Tyrese Haliburton, Tyler Herro, Jordan Poole, and Kevon Looney all call Wisconsin their first home. Now, Johnny Davis is looking to become the next Wisconsin born athlete to take the NBA by storm. After starting in 31 games for the University of Wisconsin this past season, Davis has declared for this year’s NBA draft. So how good is Johnny Davis?

Johnny Davis grew up in La Crosse, Wisconsin and played for La Crosse Central High School. La Crosse Central hadn’t won a state championship since 1925, that was until Johnny Davis stepped on the court. In his freshman year Davis helped his squad win the Wisconsin D2 state championship. In his senior season Davis would take a massive leap. He was unstoppable averaging 27 points and 9 rebounds and earning Wisconsin Mr.Basketball honors. He ended his career at La Crosse Central as the all-time leading scorer with 2,158 points. Davis ultimately would stay close to home and commit to the University of Wisconsin. 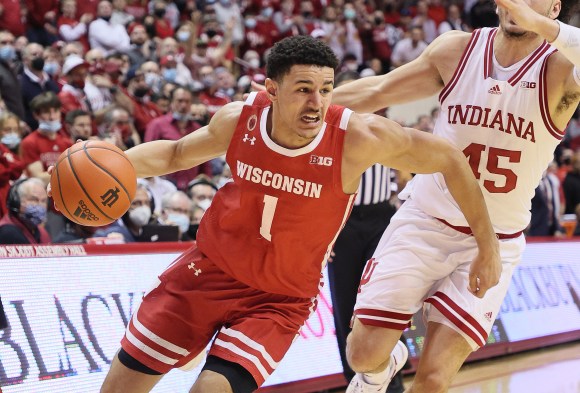 Johnny Davis would enter his freshman year at Wisconsin as a sixth man. He would see the floor in 31 contests but start in none. Even as a 6th man Davis was a major contributor, averaging 7 points and 4 rebounds. We would get to see the full potential of Johnny Davis in his sophomore season. Davis would start all 31 games for Wisconsin as a sophomore and was electric. He put up averages of 20 points, 8 rebounds, and 2 assists, en route to a 25-8 record and a three seed in March Madness. Wisconsin would meet their demise in the second round to Iowa State. 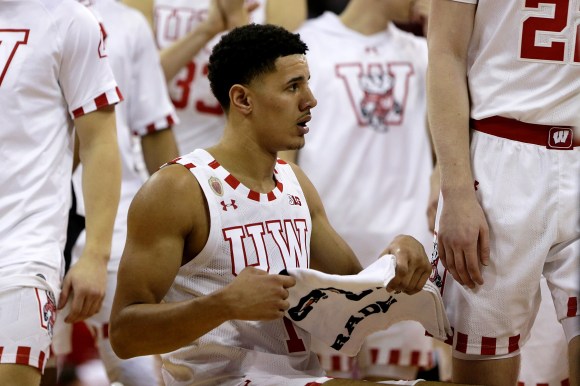 There is a lot on the court that Johnny Davis does great. He stands at 6’5” and 190 pounds. Although he doesn’t possess a maddening amount of strength, Davis more than makes up for it with his speed. He is elite in transition and is always primed to score a fast-break layup. Although he saw a dip in his three-point percentage last season, Davis finds the most success shooting in the mid-range. The most touted aspect of his game however comes on the defense end. Davis has excellent defensive IQ and is regularly beating guys to spots. Not only can he guard on-ball like a hound, Davis is active in passing lanes and causes havoc for the opposing team. If Davis can build out his frame and continue to work on his shooting he could be a legitimate contributor to winning in the NBA.

Why Paolo Banchero is the Best Player in the 2022 NBA Draft
Who Is Jabari Smith?
The Story of Andrew Wiggins

If the NCAA Tournament is March Madness, then consider this to be its pre-psychotic warm-up—between now and Selection Sunday on March 13th, all 32 Division 1 conferences will stage their conference tournaments and reward the champion of their mini-fiefdom with a bid to the Big Dance. Although we’ve just barely escaped February’s wintry clutches, a few conference tournaments are already in swing and the first batch of NCAA Tournament berths will be secured this weekend. With more than 300 high-stakes games on tap over the course of 11ish days, this is the best and most disorienting part of the college hoops calendar. Luckily, we’re here to help. Here is our guide to the Big Ten tournament.

Purdue (25-6, 14-6; +185 to win): Despite finishing third in the conference, the Boilermakers are generally accepted to be the best team in the league. Even after a small skid that saw them lose two of their final three games, Purdue still has the most prolific offense in the country. Still, a porous defense could imperil their title hopes.

Illinois (22-8, 15-5; +380 to win): Thanks to their head-to-head win over Wisconsin, the Fighting Illinois captured the Big Ten regular season title. With an incredibly balanced team that ranks in the top 30 both offensively and defensively, Illinois has a strong chance to win the Big 10 tournament for the second year in a row.

Wisconsin (24-6, 15-5; +800 to win) This is, once again, a Wisconsin basketball team. Like all previous iterations, this year’s Badgers team plays a slow-paced, disciplined style of basketball that allows them to frustrate their more talented opponents. Led by superstar guard Johnny Davis, the Badgers have six Quad 1-A wins.

Iowa (22-9, 12-8; +400 to win ): National Player of the Year Luka Garza may have graduated last year, but the Hawkeyes’ offense hasn’t really missed a beat. Similar to Purdue, the Hawkeyes have a top five offense that they rely on to offset their defensive deficiencies.

Jaden Ivey, Purdue: While Ivey isn’t a huge presence in the National Player of the Year race, he has a strong argument to be the conference’s best player. At times, he resembles a 6’5 Ja Morant, a dynamic guard who moves at an entirely different speed than the rest of the sport. His averages of 17.2 points, 4.7 rebounds and 3.0 assists per game undersell his true impact. A his best, he’s the most exciting and dynamic player in college basketball

Johnny Davis, Wisconsin: On a sometimes staid and listless Wisconsin team, Davis provides a much-needed scoring jolt. After a quiet freshman season, Davis has exploded as a National Player of the Year contender and likely NBA lottery pick; his 20 points per game is one of the highest marks that any Big 10 guard has ever posted.

Kofi Cockburn, Illinois: He’s huge and nobody can guard him. College big men simply aren’t equipped to handle somebody as massive and strong as Cockburn. Cockburn is the only player in the nation to average more than 20 points and 10 rebounds per game.

Keegan Murray, Iowa: Absorbing the bulk of the possessions left in the wake of Luka Garza’s graduation, Murray led the Big Ten in scoring with 23.3 points per game. Impressively, Murray became the first player ever to record 50 dunks and make 50 three-pointers in the same season.

Illinois. The Big Ten is one of the premier conferences in college basketball, but the best teams are still lopsided in weird ways—Purdue and Iowa both have defenses that are disqualifying bad; Wisconsin doesn’t have reliable scorers outside of Davis. In this sense, Illinois’ balance and depth make them the safest choice to win the title.

If college football is so thoroughly dominated by the SEC that  “Finnebaum Show” caller insanity has become a national affliction, college basketball remains a rich buffet of regionalisms. Each conference possesses it’s own unique tannin profile. The Big 12 is home to grindhouse auteur coaching as heavyweight tacticians like Chris Beard, Scott Drew, Bill Self and Bob Huggins try to fistfight offenses into submission with hectoring, no-middle defensive schemes; the SEC launders its football riches through their hoops programs as slick-haired coaches flim-flam their way into the best backcourts that NIL money can buy; the ACC is a closed-loop edition of The Bachelor in which the same 14 teams thirstily compete each year to be recognized by Duke and UNC (chin-up NC State, at least you made it to Hometowns); the Pac 12, as far as I can tell, doesn’t really exist.

In this sense, the Big Ten has been defined by its yeoman failure; No Big Ten team has won the NCAA Tournament since 2000.. Every year for the last 22 years, corn-fed Goliaths shuffle around the Midwest during the winter, stomp their way to 62 points per game during conference play, and then lose in March to teams who don’t hold mothballed Bobby Knight instructional VCR tapes as the peak of hoops.

This year, though, the Big Ten might just be the most talented conference in the country. While the SEC and Big 12 probably have deeper reserves of complete, competitive teams, the Big Ten is loaded with star players—there’s a non-zero chance that the All-American first team is comprised entirely of Big Ten players. As such, this crop of talent has begun a grassroots reimagining of Big Ten basketball, potentially nudging the league from its stodgy past and into a more dynamic future.  Even if no Big Ten outfit wins the NCAA Tournament, the incandescence of the its best players could drag the conference into the 20th century.

The Purdue Boilermakers, the third-ranked team in the last AP Poll, have built the best offense in the country by modernizing traditional Big Ten sensibilities, pairing the one of the country’s best guard (Jaden Ivey) with its best big man battery (Trevion Williams and Zach Edey). Although Purdue has the personnel to run the kind of NBA-style, spread pick-and-rolls that have become increasingly trendy in college, they instead opt for a bespoke choreography tailored to their players’ individual goodness. Ivey is already one of the fastest players in college basketball, but he becomes even more dangerous when he’s sprung by jet sweeps and dribble-handoffs; the 7’4 Edey is unstoppable on the block, especially considering the deep post position that Purdue establishes for him with their screen-setting and misdirection; Trevion Williams is empowered to flex his passing chops, picking out cutters like a Stop & Shop Nikola Jokic.

Whereas Purdue deploys a fairly egalitarian attack, Wisconsin, Illinois, Iowa, Ohio State are studies in heliocentricity, funneling the bulk of their offense through their respective star. In Madison, Johnny Davis has emerged as the National Player of the Year favorite for the Badgers. After not starting a single game his freshman year, Davis is now the fourth leading scorer in the country with 22.3 points per game. In a signature 37 point outburst against Purdue, Davis buried the Boilermakers under a torrent of angular pull-up jumpers and grifted his way into 12 free throws. A patient, muscular shooting guard, Davis carves out space for self-exploration, even while operating within Wisconsin’s perennially safety-locked flex offense.

Moreover, Kofi Cockburn has evolved into the fulcrum for Illinois’ offense, transforming from a play-finishing remora into a world-historically punishing force.  His success is easy to understand: he’s massiver than any player tasked with guarding him. Short of sending a double team, defenses don’t have much recourse from preventing Cockburn from rooting himself in the middle of the paint and shoulder-checking his man into oblivion. Cockburn amasses up a brutalist 22 points and 12.5 rebounds per game through malice and dead lifts alone.

For the first time in years, teams across the Big Ten are demonstrating intent and purpose—there’s an acknowledgement that running your offense through your best players is common sense and not some moral failing, that basketball games are determined by talent and skill rather than Protestant work ethic. Until (possibly) this year, the problem with Big Ten basketball this millennium is that teams have placed more emphasis on the Big Ten part of the equation and not enough on the basketball. Like animals born in captivity, Big Ten teams have grown accustomed to the weird, insular confines of the conference and have struggled outside of them. Encouragingly, though, Big Ten teams fared well in non-conference play: Purdue boasts wins over North Carolina and Villanova; Wisconsin beat Houston; Ohio State upset Duke.

So, will a Big Ten team win the NCAA tournament? Probably not!  But Ivey, Edey, Williams, Davis, Cockburn, Murray and Liddell provide a blueprint for how teams can exist beyond the cramped mind palace of midwestern basketball convention.

Ja Morant is the NBA’s Newest Superstar
Is LaMelo Ball the Next Jason Kidd?
How Far Can Donovan Mitchell Take the Jazz?