Wordle, the word guessing game that has seared the word knoll into my brain forever, has become such a common phenomenon that itâ€™s not even especially notable anymore. Itâ€™s been subsumed into daily life (and into the New York Times), becoming an unlikely piece of mainstream popular culture. In Wordleâ€™s wake, a wave of imitators has emerged who have grafted a wide variety of premises onto the familiar Wordle format. Here are the best Wordle imitators and where you can find them. 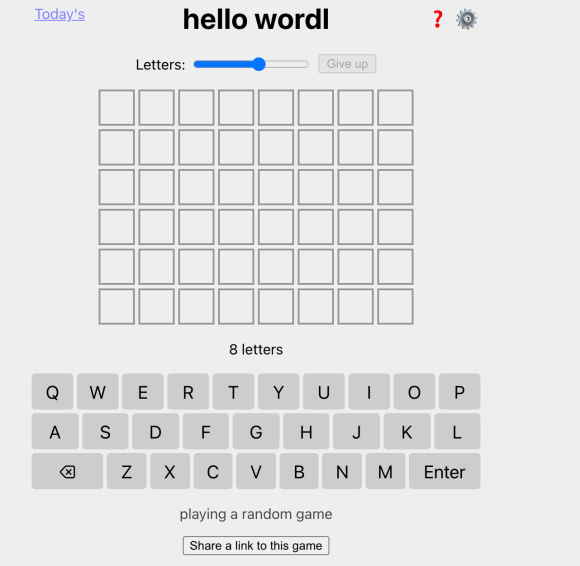 A more customizable version of Wordle, Hello Wordl allows you to set the length of the word youâ€™re guessing and play an unlimited number of times. 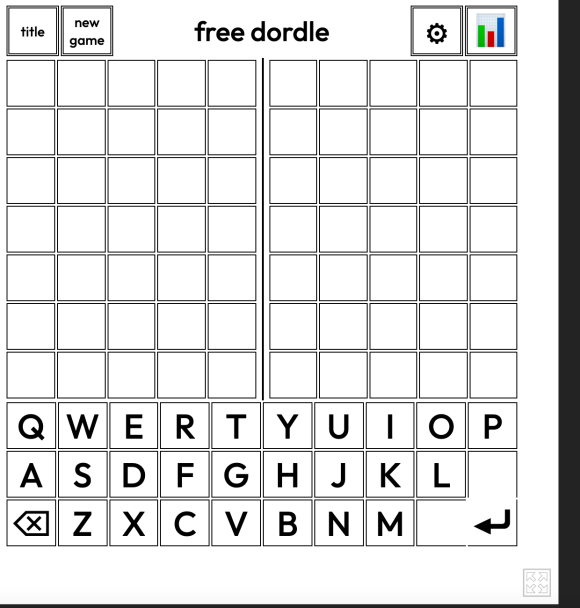 Just about anybody can figure out a five-letter word. Only real heads can guess two five-letter words. As such, Dordle is Wordle, but two at the same time; instead of having six guesses to identify one word, you play two simultaneous games of Wordle and have seven attempts to figure it out. In case the daily Dordle isn’t enough, there’s an unlimited practice mode as well. 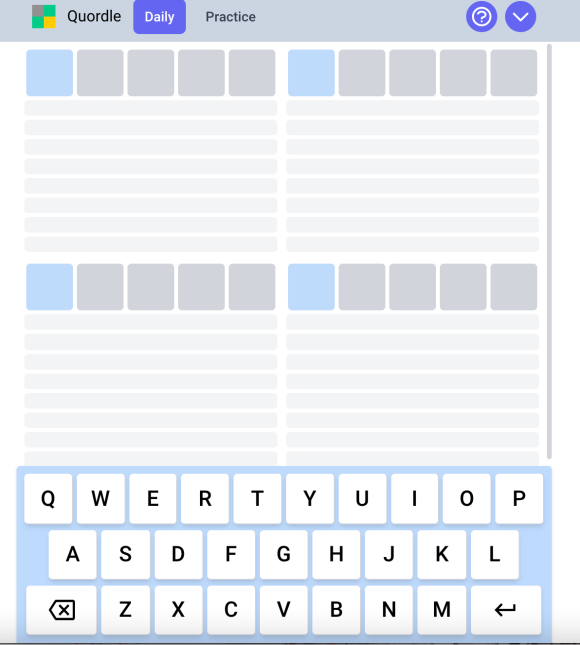 If Dordle is still too easy, Quordle could be more your speed. Whereas Dordle is merely two Wordles at once, Quordle ups the number to four; you have nine chances to solve the four answers. Additionally, the answers tend to be obscure and arcane compared to Wordleâ€™s more standard fare, ratcheting the difficulty up even more. Like Dordle, there’s both the daily Quordle and a practice mode. 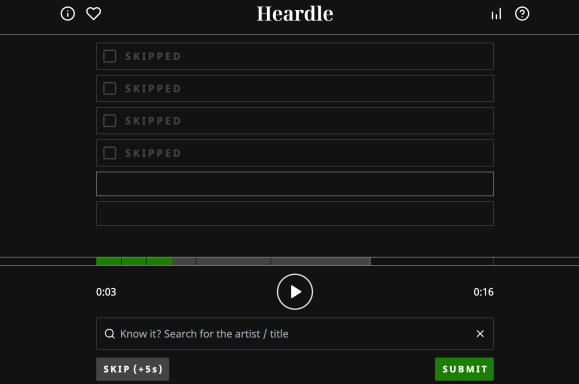 Heardle is Wordle, but for music. With each incorrect guess (you get up to six tries), more of the song is revealed. For the most part, the songs are mercifully mainstream.

Named after San Antonio Spurs center Jakob Poeltl, Poeltl is the NBA-themed version of Wordle. In this one, you guess basketball players and are given clues based on the age, height, position, jersey number and team of your previous guesses. 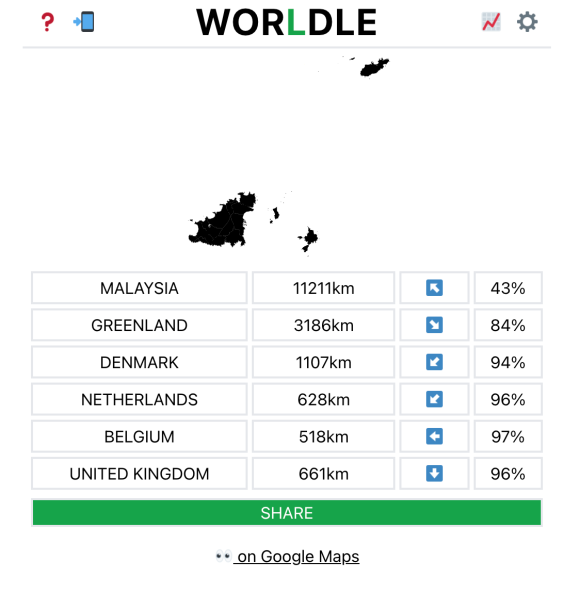 In Worldle, you guess countries, with small hints on the countryâ€™s shape and place in the world relative to your previous guesses.Â 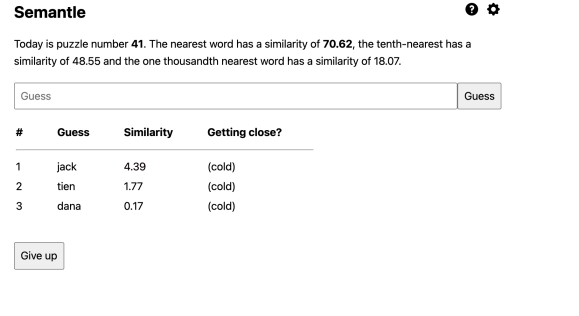 Rather than trying to discover a word based on its letters, Semantle asks you to find the word based on its vibe.Â With artificial intelligence rating the general mood of the word relative to other words (i.e. “happy” is close to “glad” or “play” but far from “sad” or “desk”), you have unlimited guesses to ID the right choice.

Wordle, the hottest game on the internet, isnâ€™t some cartoon-y battle royale where middle schoolers Floss dance over your virtual corpse. It doesnâ€™t have a dopamine-flooding progression rewards system or some easily-memeable viral hook. There arenâ€™t even birds of either the Flappy nor Angry variety. Instead, Wordle is as bare-bones as it gets, a frills-less web page where youâ€™re given six chances to guess one five-letter word each day.

The mechanics of the game are simple: you enter a five-letter word and each letter then turns green (right letter in the right spot), yellow (right letter, but in the wrong spot) or gray (the letter isnâ€™t in the word). From there, you get five more attempts to wrangle and identify the word and make all the tiles light up green. For your troubles, you can share your score in the form of a little color-blocked graphic, a small-time shibboleth to fellow Wordlers that youâ€™re a big smart guy who knows words like tiger or banal or gorge.

While this may sound dauntingly hard (at first, it can feel like trying to solve a crossword without clues), one of the reasons for the gameâ€™s success is that Wordle strikes the sweet spot between difficult and accessible, managing to be challenging without ever being discouraging. With six chances to solve each dayâ€™s puzzle, the odds are titled in your favor, but not to an obvious, fun-killing degree.

Why Should I Play Wordle?

Wordle is the rare thing that exists purely because itâ€™s fun. In a world where nearly every space of the internet has been colonized by corporate interests and entertainment has basically transformed into ads for the ads, Wordle was created by software engineer Josh Wardle as a gift to his girlfriend last summer: she likes word games, so he made her one. Even as culture becomes gamified and abstracted in dystopian ways (like being able to gamble on court cases with bitcoin), Wordle is a walled garden for harmless fun, free of intrusive pop-ups or Slack messages from your boss.

Since the game has ballooned from around 90 users to now over 300,000, a small community has formed around it. People on the Wordle subreddit trade strategies.â€œWordleâ€ trends daily on Twitter as people share their score. Linguists and cryptography enthusiasts share their attempts to craft the perfect opening wordâ€”options like â€œSOAREâ€ or â€œOUIJAâ€ or â€œRATESâ€ are strong openers because of their density of either vowels or common consonants.

Moreover, the game possesses a charming impermanenceâ€”each dayâ€™s edition is up for 24 hours and then disappears into the ether. There isnâ€™t even an archive of previous Wordles, much to our chagrin. In this sense, Wordle is the virtual equivalent of stepping out of a crowded bar to smoke a cigarette with a friend, providing a brief respite from the din of online life; it’s a reminder that there are still some nice, little things you can allow yourself as a treat, at least for a few minutes each day.

Where Can I Play Wordle?

Peter Wright Beats Michael Smith, Wins PDC Championship
Where Do the Lakers Go From Here?
Anthony Edwards Is Living Up to the Hype